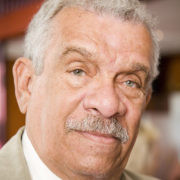 The Caribbean poet, essayist, painter and Nobel laureate Derek Walcott has passed away. Walcott, who was born in 1930 in St. Lucia and died there on March 17th, 2017, is the author of countless collections of poetry, pieces of theater and of the epic poems Omeros and Tiepolo’ Hound, which present reflections on the culture(s) of the Caribbean and on his exile in Great Britain and in the United States of America.

In his essay “The muse of history” (1974) he writes: “I give the strange and bitter and yet ennobling thanks for the monumental groaning and soldering of two great worlds, like the halves of a fruit seamed by its own bitter juice, that exiled from your own Edens you have placed me in the wonder of another, and that was my inheritance and your gift.“

Alongside Édouard Glissant, Paul Gilroy and Antonio Benítez Rojo, Walcott was one of the most read and extensively acclaimed Caribbean writers and thinkers of his generation.